The woman being featured in my report turned to the man next to her and said, "It doesn't matter what we say. They don't use this part of the sound."

That reminded me of why I write this blog and work as a soundbite coach. Most people people don't know the rules of the game, and as a result, some can be taken advantage of.

I quickly and graciously corrected the woman, telling her that for our purposes, as we shot this video to illustrate what she does, the "natural" sound could be heard and might be used as what many reporters call a "nats pop" -- or burst of sound -- to make a report more interesting.

Here are two other tips that might help you when reporters feature you:

1. Be yourself--if you have a gregarious, engaging personality, it's fine to use big gestures, make faces and roll your eyes.

2. Don't ask for the "outtakes" or the "rough cut." We understand you would love to have professionally-shot video of yourself to use for marketing or promotional purposes, but we are not allowed to give that to you. Most stations will put a link of your story on their website, and some will let you buy a DVD.

The woman I mentioned earlier was good-natured and a quick study. She immediately adjusted her conversation to reflect the tone of the story. And as I wrote the piece, I was happy to hear that she was full of nats pops!
Posted by Lorri at 10:50 AM No comments:

Take Advantage of the Last Question

Most reporters will end most interviews by asking, "Is there anything else you would like to add?"

They may throw a spin on it by asking, "Is there something I should be asking you?"

This is a terrific opportunity for you to share your message. Reporters expect you to get on your soapbox given this chance. You may help them realize there is more to the story, and they will ask a follow-up question. Your passion will often ratchet up in this response. As a result, your answer could be the soundbite that makes the news!
Posted by Lorri at 11:02 AM No comments:

I've taken a part-time job reporting in Phoenix, and I love it! For the most part, the newsmakers I've interviewed on camera have done a decent job making their points.

Here are three steps they've taken that have served them well:

1. Attire - Whether it is a CEO, attorney, entrepreneur or scientist whom I've interviewed, all dressed like you might imagine a person in that role would. This is good, not to reinforce stereotypes, but because you don't want to distract the audience.

2. Cooperation - When you're a part-timer, your schedule is not always flexible. The newsmakers have been accommodating and have also helped me make contacts with other people who could be a resource for the story.

3. Authenticity - The newsmakers have come across as genuine and honest, even though their issues might not be popular with the public.

What could they do better:

1. Don't be nervous - an investigative reporter would take this as a sign that they have something to hide and go for the jugular.

2. Keep answers short - long, rambling responses make it difficult to follow and will get edited.

Learn more from television newsmakers by watching and analyzing for yourself who resonates and why.
Posted by Lorri at 7:34 PM No comments:

How News Coverage Has Changed

How are you getting your news? 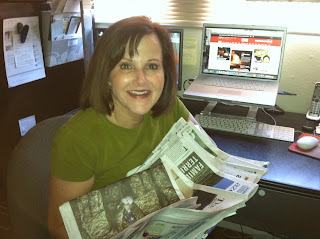 If you're reading just one newspaper or looking at one news website or watching only one cable channel or local station for your news diet, you may be news malnourished. Here are reasons to get your news from multiple sources:

1. To be interesting - variety is the spice of life. If you and your friends all read the same stories or listen to one radio station, your conversations could become dull.

2. To understand the other side. Zig Ziglar said he read the Bible and the newspaper every day, so he'd know what the devil was up to. It's great to have an opinion, but you'll sound smarter if you know what your opposition is saying.

3. To be innovative - if we all get our news from the same sources, we will have group-think. At most jobs, original ideas and creative input are valued. If you're a CEO, you must have fresh eyes. Get news from trade journals, social media, alternative sites, newspapers from a different state, and you will learn.

As a journalist, I know that there is so much more news going on that does not get into one newspaper or one newscast. Local news has become a headline service: some producers are required to have 20 or more stories in a half-hour newscast. This means about 12 to 15 seconds per story. If you want to go in-depth, you have to go beyond the headlines.
Posted by Lorri at 8:38 PM No comments:

When your client is happy, it makes you happy, too. One reason the following letter sent after a presentation last month means so much to me is that David had been part of a media training workshop ten years ago, and he remembered me, as mentioned below.


Lorri,
I'm not just saying it to be nice -- you did a fabulous job! You brought a lot of value, entertained the audience, and they all left with great information and action items. I also appreciate the generous way you shared the stage and worked with Jim Hinshaw. You guys crafted a wonderful presentation! BTW, the editor in chief of Contracting Business Magazine was in the audience and he said you did a great job too.

I think I told you this, but in case I didn't... Years ago when we were all at PRIMEDIA you did a Media Training seminar for all of the managers. I thought it was great. You gave us terrific techniques and the right way to think about working with the media. So when we were talking about this event, and the idea of teaching about the media, you were the first person to come to mind. I told everyone that you were THE person to do it. You didn't let me down; it was great.

I hope we have another opportunity to work with you.

When Speaking in Soundbites Isn't the Best

The Right to Bare Arms

Email ThisBlogThis!Share to TwitterShare to FacebookShare to Pinterest
Labels: Looking Your Best, News, Television, What to wear on TV