need insurance. Of course, you have it, you think. But could your business handle the headline coverage that would come with a crisis in an explosion, ugly lawsuit, or accidental employee or customer death? What if one of your drivers fell asleep at the wheel and caused multi-car fatalities? What if one of your employees embezzled, sexually harassed, committed arson or murdered co-workers? Would you be ready to handle the reporters who descended immediately?

Media crisis insurance can come in the form reading blogs like this or coordinating Soundbite Coach training like I offer. But in these times, you might not be able to afford that. Here's a question to think about: can you afford the negative publicity that might cause customers to lose all faith in your products or services?

The Greatest Movie Ever Sold will force you to
look at every advertisement, every 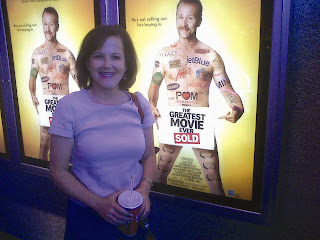 movie, billboard, TV show and even school fences differently. Product placement didn't used to bother me--it seemed much more realistic than those generic packages that no one really uses.

Now, there is a whole industry based on creative advertising and placement, and documentarian Morgan Spurlock provides an entertaining but horrifying tale of how we are bombarded with ads. Be an informed consumer... OR as a newsmaker... be creative and be inspired about how you can find new property to sell your products or services.
Posted by Lorri at 8:17 PM No comments: 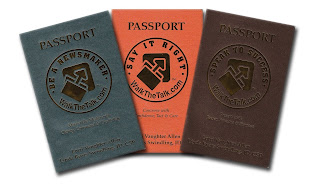 High school or college graduates need to know how to make better presentations and use the right words in the workplace. And they may even need to know how to work with the news media. Attorney Linda Swindling and I co-authored these three pocket-sized Passport books to provide convenient help when you need it. Each book retails for $5.95, and the content will aid careers for a lifetime. The titles are:

You can order directly from the publisher at http://www.walkthetalk.com/, or if you prefer to get a personalized copy, email me at Lorri (at sign) SoundbiteCoach (dot) com for details.

Congratulations and best wishes to all graduates!
Posted by Lorri at 7:43 PM No comments: 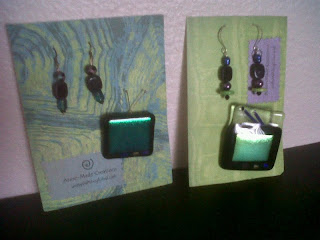 Years ago, a television consultant assigned to work with me wore a metal TV pin. It was cool. I have looked for a TV pin to wear on my lapel ever since. When I met Anne Perry and heard she made jewelry, I commissioned her! She works with glass. I am thrilled with the results. Anne even created matching earrings!

Email ThisBlogThis!Share to TwitterShare to FacebookShare to Pinterest
Labels: Television

Is This Fair Coverage?

Recently, on a Phoenix station, I watched a local reporter cover a story on a proposed gun ban. I lived in Tucson last year, less than a mile from the Safeway, the site of the tragic shootings that wounded U.S. Rep. Gabrielle Giffords, so I am personally sympathetic to ideas that might prevent events like this in the future. But I was professionally appalled at what took place in this news report.

All of the anti-gun people interviewed were attractive, articulate and well-credentialed. One, Dr. Peter Rhee, University Medical Center's surgeon in charge of the Trauma unit, became well-recognized during the press conferences held starting on the day of the January 8 shootings.

At least the reporter attempted to get the other side of the story. Representing the Second Amendment argument was a dishelved, dirty man wearing an NRA cap. He had missing teeth and used poor grammar. C'mon, was this the best you could find in conservative Arizona? His credibility was no match for the anti-gun side.

This may be a lesson as much to reporters as to those trying to get coverage. And it's a lesson for those of us who watch news. Analyze reports carefully. Are you swayed because one spokeswoman is prettier than another? Do you consider one side's argument "better" for reasons that don't make sense?

It's stories like these that begin to convince me that perhaps all reporters are not fair and balanced after all.
Posted by Lorri at 6:44 AM No comments: